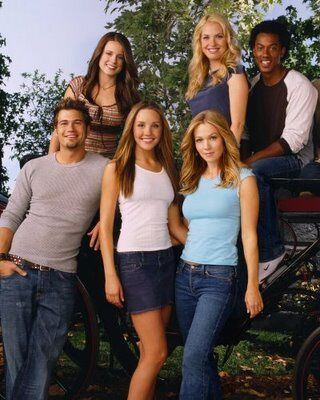 124 24. BOY'S CLUB October 7, 2004 Holly begins to feel stressed from juggling her schoolwork, job and friends--and Henry feels the pain because Holly doesn't support him when he has his wisdom teeth pulled. Meanwhile, after Val becomes frustrated with Peter's business antics and the new male-oriented atmosphere at work, she quits.

131 31. ABSENCE MAKES THE HEART GROW NEVER October 20, 2004 Holly thinks she's ready to tell Henry that she loves him, but she hesitates after she considers her lingering feelings for Vince. Meanwhile, Val's first business trip out of New York City is surprising when Peter becomes her neighbor in the hotel.

123 23. I LOVE YOU...SOON October 6, 2004 What's a teenage girl to do when her widowed father takes off to live in Japan? Move in with her straitlaced sister and wreak havoc, that's what!

125 25. WHEN HOLLY MET TINA October 11, 2004 In order to help Val acquire her first client, author Judith Haven, since starting her own public relations firm, Holly reluctantly befriends Judith's troubled teenage daughter, Tina. Meanwhile, Lauren, who is now Val's employee, uses her charisma to distract their former boss Peter when the girls find themselves in direct competition with him for the new account.

126 26. THE LOFT October 12, 2004 Now that Val has quit her job to start her own business, the girls need new office space. With few alternatives, Holly takes the initiative to visit Tina's wealthy former neighbor and convince him to rent the girls his beautiful loft in the city while he serves a jail term.

127 27 LIKE A VIRGIN...KINDA October 13, 2004 Holly is shocked to learn that Henry has already lost his virginity, and her decision to find out about his former girlfriend leads to some disturbing information. Meanwhile, Lauren devises a plan to get Val to relax and take a day off from work.

128 28. NO MORE MR. NICE GUY October 14, 2004 Val confronts Holly about neglecting Henry and spending too much time with cute messenger Vince. Holly reacts by pointing out Val's hypocrisy, and she challenges Val to examine her own feelings for Peter, her handsome former boss.

129 29. I'M SORRY..SO SORRY October 18, 2004 Holly's plans for a skiing weekend with Henry and their friends, including Tina and her boyfriend, Cal, come to a halt when Tina and Cal end their relationship. Holly must decide if she should spend the weekend on the mountain or respect Tina's wishes and not go. Meanwhile, Val's dating advice to Lauren backfires when Lauren's new man, Greg, becomes smitten with Val, leaving Lauren discouraged and heartbroken.

130 30. PARTIALLY OBSTRUCTED VIEW October 19, 2004 When Vince arranges for Holly and Tina to go to a band rehearsal, Holly becomes caught in a series of lies. She must make up a story after Henry finds out that she got front-row seats to a concert by his favorite band. Meanwhile, Val goes to a party for the most eligible single men in New York City at which Peter is an honoree, and she is surprised by his attentiveness.

132 32. THE ODD COUPLE October 21, 2004 Holly feels conflicted when Henry temporarily moves into Vince's apartment. When it appears that Tina is flirting with Vince, Holly must face her jealousy and figure out what--and who--she wants. Meanwhile, Lauren convinces Val to try a dating service in order to distract her from Peter.

133 33. REGARDING HENRY October 25, 2004 Holly searches the city for Henry after he ends their relationship when he overhears her confessing to Val that she is attracted to Vince. Holly's life becomes even more complicated when Vince find outs about Holly's secret feelings.

134 34. THE INCREDIBLE SHRINKING GROUP September 12, 2004 October 26, 2004 Holly comes close to destroying her friendship with Gary when she manipulates him into arranging a meeting with Henry, who is still upset with her because of her attraction to Vince. Meanwhile, Val convinces Lauren that they should both stop eating sugar, but it's Val's willpower that falters.

135 35. THE HOSPITAL September 19, 2004 October 27, 2004 After Vince is hit by a car, Holly visits him in the hospital, and they share their first kiss. However, they both realize that they can't date without hurting Henry's feelings. Meanwhile, as they wait to hear about Vince's condition, Val and Lauren vie for the attention of a handsome doctor.

Holly rushes to tell Vince that she saw Henry with another girl--meaning that Holly and Vince can date without feeling guilty--but her excitement turns to anger when she catches Vince in a compromising position. Meanwhile, Gary gets a job at a trendy clothing store, and sales skyrocket when the female customers see him scantly dressed. And Lauren encourages Val to have dinner with a former boyfriend from high school who is moving to New York with his fiance.

37. SKY RINK SUCKS October 3, 2004 Holly and Vince each have different ideas for celebrating Gary's birthday. However, their plans come to an abrupt halt when they discover that Gary's ex-girlfriend Jill is in town and has been lying to him for months.

38. LUNAR ECLIPSE OF THE HEART October 10, 2004 Holly decides that dating a cute guy--who also happens to be Gary's boss--will be a great opportunity to make Vince jealous. But Gary worries that Holly’s scheme may cost him his job. Meanwhile, Val and Lauren's friendship and work partnership are tested when Val contemplates a job offer from a top public relations firm.

39. VAL & HOLLY'S NOT-BOYFRIENDS October 17, 2004 When Vince's grandfather dies, Holly travels upstate to comfort him--then misinterprets his reaction to her thoughtfulness. Meanwhile, after Val's former boyfriend, Rick (recurring guest star ED KERR), has a near-death experience that gives him a deeper appreciation of life, Val finds him more attractive than ever.

40. THE INTERVIEW October 24, 2004 After skipping her admissions interview at Columbia University in order to spend time with Vince, Holly is shocked to learn that the next available interview is not for another year. Val is furious that Holly has once again put Vince ahead of her own future. Meanwhile, Lauren contemplates breaking up with her doctor boyfriend, Brad (recurring guest star KEN MARINO), due to his uncontrollable giggling during their lovemaking.

41. THE BIG PICTURE November 7, 2004 After Henry puts aside his own responsibilities to help Holly with her application for an internship in Paris, she begins to wonder if she made the right decision to end their relationship. Meanwhile, Val meets Rick's (recurring guest star ED KERR) fiance, Julie (LISA ARNING), who, after seeing former high school sweethearts Val and Rick together, insists that Rick never see Val again.

42. THE ANTI-PROM November 14, 2004 Exasperated with all of the pre-prom fuss, her conflicting feelings towards Vince and Henry and her impending internship in Paris, Holly decides to host a stress-free "anti-prom" at the loft. Meanwhile, Val tries to figure out if the invitation to her ex-boyfriend's wedding that she received is a mistake.

43. ROLLIN' IN IT November 21, 2004 When Holly receives $2,000 from her grandmother for her 18th birthday, she decides to spend it all on a lavish hotel suite. Once again, Val becomes upset with Holly's lack of priorities and vows to teach her a lesson in responsibility. Meanwhile, Lauren's love for money and material possessions causes her fiance, Brad (recurring guest star KEN MARINO), to cancel their engagement.

44. SEASON 2 FINALE November 28, 2004 Holly is elated to be accepted for an internship in Paris, but when Henry and Vince each kiss her before she leaves, she knows the time has come to decide between them. Meanwhile, in order to distract herself from Rick's (recurring guest star ED KERR) upcoming wedding, Val books a trip to Venice with Lauren. However, when Val gets sick and has to cancel, she is pleasantly surprised by a visit from Rick--who is still single. Also, it could become a summer of love for Gary and Tina when they share their second kiss.

Community content is available under CC-BY-SA unless otherwise noted.
Advertisement